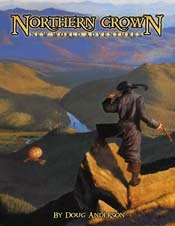 I wanted to accommodate both history and legend, stirring them together into a setting that would have the feel of the historical past but would allow for heroic adventures, magic, and monsters. The geography would look the same, but the place names would be subtly altered, suggesting an alternate history where the might-have-beens and what-ifs of our past were made real.

Today, we’re announcing an agreement with Battlefield Press that allows them to bring Northern Crown author Doug Anderson’s vision of legendary North America up to date. They’ve shared with us a plan to combine the two existing Northern Crown volumes into one complete book, and in the process, update all material to the current Pathfinder rules. In addition, they plan to detail the Southern continent and create a new creature compendium for the setting.
We’re excited to see this remarkable RPG setting given a new opportunity to flourish because we believe that games like Northern Crown embody the truest creative spirit of roleplaying. It speaks unmistakably to our founding slogan, “Charting New Realms of Imagination.”
Visit the Battlefield Press website for more information as their venture unfolds.