Between Sand & Sea Arriving in Stores 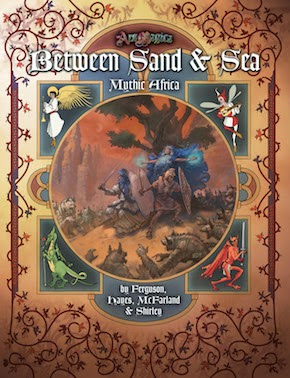 Between the Great Desert to the south and the Mediterranean Sea to the north lies a region barely inhabitable by humans — or so it seems. In fact, some of the largest and furthest-reaching dynasties known to the world have sprung from here, the lands of Mythic Africa. For the first time, this region and its many stories are brought to life in Ars Magica Fifth Edition.

Between Sand & Sea provides cultural and magical details for Mythic Africa, from the ruins of ancient Carthage to the bustling cities of the Tell and all of the vibrant locations and peoples between. Wind-haunted mountains, mysterious folk of the Great Desert, and cunning Settuten magicians give both players and storyguides alike a wealth of new and never-before-seen lore far from the routine of northern covenants and tribunals.