Published by: Atlas Staff 09/08/2010
This solicitation just went out to our distributors:

Rival Magic
An Ars Magica 5th Edition Sourcebook
The Order of Hermes is supreme, unchallenged in its mastery of magic. All other magicians are hedge wizards ... maybe interesting to researchers, but certainly no threat. Or so magi of the Order tell each other. And most of them actually believe it.

The four traditions in this book prove the folly of that complacency:
How long can the Order of Hermes maintain its pleasant illusion of superiority?

Shipping to Distributors in December 2010 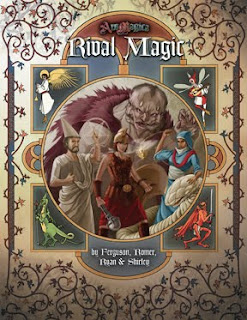