Cracking the Code in Letter Head

One of the most common comments from new Letter Head players is that “there always seems to be exactly the right number of each letter.” It’s part of what makes it playable in so many ways, and easy for players of all ages to enjoy.
This is no accident! The majority of letter-based games include letters in ways that are very different from how we actually use those letters in everyday English. Game designers Kristan Lawson and Herbert R Lawson went to great lengths to make sure that every letter’s card shows up the average number of times it’s used in the 100 most common English words.
The points for each letter are determined by how easy it is to use in words of varying lengths. For example, since the most common letter is E, the designers assigned it a point value of 1. And since S is exactly half as common as E, S is worth 2 points. Also, the rarer the letter, the warmer the color--a 1-point card is purple, while a 14-point card is orange. 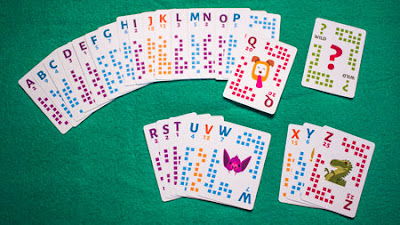 How did they come up with these perfect proportions? Kristan and Herbert averaged together SIXTEEN reliable academic studies of letter appearance in common English words. Many of these studies were originally conducted to determine letter frequencies to help cryptanalysis, or code-breaking. You can read more about their study on the Atlas Games website. And thankfully, the only code-breaking Letter Head players have to do is to figure out whether their fellow players are bluffing!