Designer’s Notebook: The Story of Hounded

Perhaps the hounds would have seemed rather a mixed pack to a master of hounds today. There were half a dozen black and white alaunts, which looked like greyhounds with the heads of bull-terriers or worse. These, which were the proper hounds for boars, wore muzzles because of their ferocity. The gaze-hounds, of which there were two taken just in case, were in reality nothing but greyhounds according to modern language, while the lymers were a sort of mixture between the bloodhound and the red setter of today. The latter had collars on, and were led with straps. The braches were like beagles, and trotted along with the master in the way that beagles always have trotted, and a charming way it is.

– T.H. White, The Once and Future King

Clint Bohaty has been thinking about Hounded for a long time. This two-player game of cat-and-mouse (or, rather, fox and hounds) was a dream project for its designer, and as he reveals below, close calls, sweaty palms, and racing hearts were always part of the plan.

Hounded was inspired by a short and beautifully written chapter on boar hunting found within T.H. White's The Once and Future King. In chapter sixteen of the book, Wart (a young King Arthur) along with Merlin and King Pellinore, join Sir Ector and his Master of Hounds on a deadly boar hunt.

White goes into great detail on the hunt's preparations, giving insight into how the Master of Hound's builds out a proper pack of hunting dogs. I'd always known that many beloved dog breeds were originally brought up for hunting – but I'd never given much thought as to how the hunt actually went. As I learned, each dog is bred and selected for a specific function, and many times multiple breeds must work together to successfully capture their prey.

Much like drafting players to build a winning sports team, the Master of Hounds must draft a pack of dogs to win the hunt. Bay dogs, like the foxhound, were bred with loud booming voices to scare and corner prey, while catch dogs, like the american bulldog, were bred with powerful jaws to grab and hold down large prey.

During The Once and Future King, I found myself wanting to be a part of that hunt, stepping side-by-side through the thickets with Wart, with our boar-spears held high and our senses acute. The experience of a hunt with hounds was something I suddenly wanted to be a part of, and crafting a board game around the experience was one way I knew I could live it!

You can join the hunt today with Hounded, available at better game stores everywhere. Or, for more information, check out our Hounded product page!

And if you’ve never had the pleasure, T.H. White’s The Once And Future King is a must. You can find it pretty much everywhere else that great books are sold!

Master Twyti put his horn to his lips. The alaunts were uncoupled as the exciting notes of the menee began to ring through the forest, and then the whole scene began to move. The lymers which had reared the boar—the proper word for dislodging—were allowed to pursue him to make them keen on their work. The braches gave musical tongue. The alaunts galloped baying through the drifts. Everybody began to shout and run.

– T.H. White, The Once and Future King 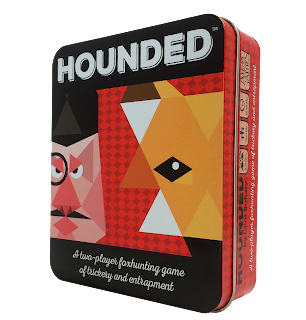