Dungeoneer: Realm of the Ice Witch now available to print on demand!

Published by: Atlas Staff 07/06/2015
It's hot outside, but we've got a icy refreshing treat for Dungeoneer fans. Realm of the Ice Witch has been out of print, but is now available as Print-on-Demand at Drive-Thru Cards. Complete your Dungeoneer set today! 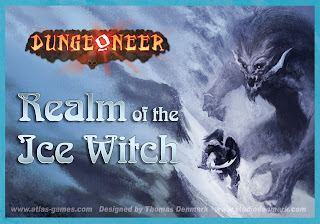 Since ancient times, Chohzar the ice witch has dwelled in the frozen lands north of the empires of men, held back each year by the warm hand of spring. But now she has let loose demons of cold to invade the warm southern lands and wrap them in her icy grip. Only the most hardy of heroes can venture into her frozen realm to stop her, before all the world is embraced by her winter spell.

Realm of the Ice Witch is a two- to four-player Dungeoneer card game. Your character explores a wilderness that you build with map cards, while fighting monsters, completing quests, and leveling up along the way.

Each Dungeoneer set can be played as a stand-alone card game, or combined with other decks for more dungeon-delving fun.