Expanding Your Demo: Shadow Before the Rumble 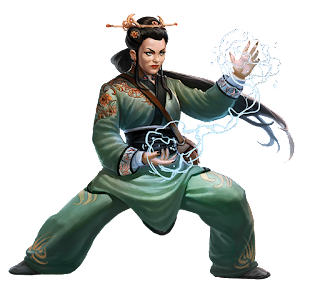 Red Packet Rumble is a two-act scenario for Feng Shui 2 that we’ve made available as a free PDF download. It’s designed to fit into a 2-hour demo slot, but it could also serve as the followup to Shadow of the Future of the Apes, the scenario included in the Feng Shui 2 core rulebook. Here’s how!

Step One: Using the 12 suggested archetypes in Red Packet Rumble, run the Shadow of the Future of the Apes scenario in the core rulebook. Include early references to Rose Muk, the decorated Special Duties Unit officer who features in Red Packet Rumble. Give the players some reason to know her.

Step Two: Run Red Packet Rumble! Take lots of notes. Who stood out as a really challenging opponent? Which melodramatic hooks were involved?

Step Three: Re-introduce the New Simian Army, who seek the same mystic amulet at the center of the action from Red Packet Rumble, ostensibly to use it to stop the Jammers. Maybe the Ascended also want the amulet for its cataclysmic power, now, so they act through the Golden Seas Triad. The outcome of the fight in the Netherworld also means the Eaters of the Lotus are enemies of the player characters, too. Will there be a battle at the Special Duties Unit headquarters? What about on top of a skyscraper in Hong Kong?

Step Four: Return to the Netherworld! Either the New Simian Army or the Ascended now have the amulet, and want to use its power. They need to enter the Netherworld in order to carry out this heinous act. Can the players make a brief alliance with one of the other factions to stop them? What if the players decide to use the amulet in another juncture to change history?

The temptation to add lots of bad guys and enemies to a campaign is great, but with only the New Simian Army, the Ascended, and the Eaters of the Lotus, together with their respective representatives and agents, you’ve got plenty to keep your Chi Warriors busy for months of play.