Published by: Atlas Staff 08/24/2012
John and I are just catching up from being at Gen Con last weekend. The Atlas Games booth was right up front by the central doors, with our sales guys from the Source doing a great job of helping customers and doing demos ... we featured Murder of Crows at our demo table, with terrific response! 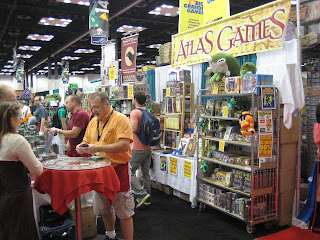 We also got a first look at the Duck of Gloom plushie/dice bag from Steve Jackson Games, which includes a special Gloom character card as a promo. So cute! 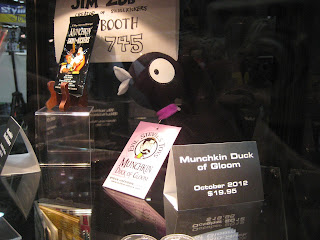 And we got to see people's reaction to the Over the Edge 20th Anniversary Edition. Here's a video of designer Jonathan Tweet paging through it for the first time, with co-designer Robin Laws stopping by to look over his shoulder. Rob Heinsoo (lead designer of D&D 4th) makes a guest appearance as well ... he tells me that he did a review of Over the Edge back in the day, so he's not just a unsuspecting bystander after all!