Published by: Atlas Staff 08/17/2015
We ran a number of scheduled events at Gen Con this year, and some of them had winners! 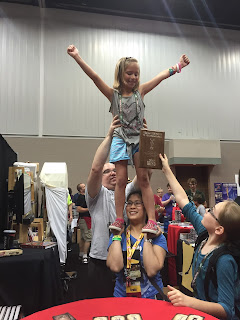 Our Three Cheers for Master Learn-and-Tournament was a series of games where newcomers to 3C4M could learn to play. Then, afterwards, they jumped into a series of games oriented toward fun rather than cutthroat competition.

Even though the keystone value was having fun, the victors of our events on Thursday, Friday, and Saturday met on Sunday at high noon in the Atlas Games booth to play it out for Master's ultimate approval. At the end, the victor proved diminutive enough that those she had bested were able to lift her into the air for Master's entertainment. (Photo credit: @Wolfrgnr.) Congratulations!

Our Gloomiest Afternoon Tea Party Ever event was a multi-round extravaganza of despair where several dozen participants chose families from among the Gloom, Cthulhu Gloom, Fairytale Gloom, and Munchkin Gloom characters. Each player brought that same family through a series of round-robin games that used random assortments of modifiers and deaths from all those same core games.

As the event progressed, each contestant helped customize five trophies — four teacups and a single teakettle — by inscribing a single word of despair on each trophy. The grand prize winner took the kettle, but the cups were awarded randomly throughout the tea party to the next player to suffer a death.

Gloom Designer Keith Baker was also on hand to sign games, offer discouragement, and randomly kill characters from time to time, all as the miserable Mr. Baker is wont to do. (So be alert.) 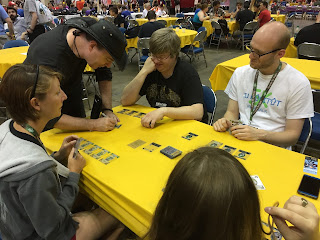 Even our Feng Shui seminar — the "Feng Shui Panel & Chi Warrior Meet-up" — had a victor as part of its Most Magnificent 20-Second FS2 Anecdote Contest. Contestant Mike Adair told a magnificent tale summarized (in his advance, written qualifier) as "Saved Rankin Bass' Santa from C.O.B.R.A. with Candycane Cage Match." Plan to bring your "A" game next year, Chi Warriors.