"Grand Tribunal UK 2011 took place 19-21 August in Cambridge, and was attended by around 25 people. It was run as part of the Consternation II convention. As well as participants from across the UK, we were joined by guests from Norway, Denmark, and Germany and, this time, were particularly fortunate in having David Chart, Ars Magica Line Editor, with us. We had five line authors there too. Highlights of the weekend were David's 'News from the Line Editor' session, two performances for us by The Capriol Mediaeval Dancers (pictured, accompanied by The Bedford Waites) and a very enjoyable freeform interactive game, 'Under African Skies.'" 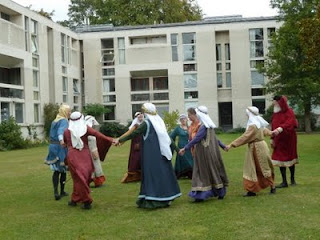