Grokking the Difference: Jeff Tidball on Unknown Armies vs. Over the Edge 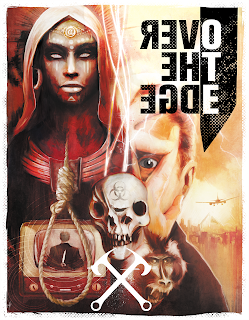 People sometimes offer vague descriptions like ''It's about weird stuff' when they're trying to describe Atlas Games RPGs, especially Over the Edge and Unknown Armies. That kind of description is is accurate but insufficient, like describing a car by saying, 'Well, it's an object,' or describing Star Wars as 'a story.'
The perennial 'weird stuff' description especially falls down when it comes to describing how Over the Edge and Unknown Armies are different from each other. It turns out that there are as many ways to talk about the difference between those two games as there were people around the Atlas Games conference table on the day the question came up. Here's my personal take:
Over the Edge is a game with international flavor that's best at telling stories about political conspiracies and outré behavior. It's about how people relate to each other in strange ways. Over the Edge has secrets that people keep from each other, but the secrets are MacGuffins — (sometimes conceptual, but still) around which dramatic relationships revolve, rather than ends in and of themselves. 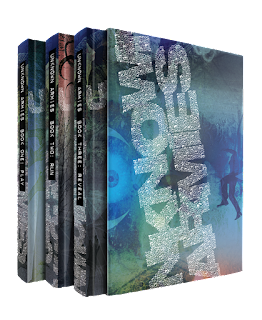 Unknown Armies, on the other hand, is a game about occult knowledge and the secret underpinnings of the universe. It asks the question, 'What will you sacrifice for power, to reshape the world in your own image?' It's about how the protagonists define themselves. Its secrets are their own ends, things its characters must find out because their demons drive them to it. Although it can be played on a global scale, Unknown Armies retains a uniquely American outlook and feel even when it's taking place in the farthest corners of the globe.
Naturally, these generalizations have their shortcomings too! Neither definition is true for all aspects of their respective games' backgrounds. Over the Edge has secrets that primarily drive inter-group conflict, and Unknown Armies has outré behavior. But broadly speaking, if you were presented with a series of character or adventure summaries and had to use these definitions as your only working understanding of these two games in order to sort them, they'd guide you to a high degree of accuracy.
The best news? Both games are awesome! If you're only familiar with one, try the other. And if you've never played either of them, now you have a way to figure out which you'll explore first.