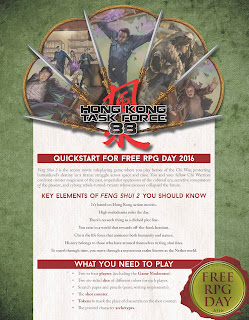 When an international drug corporation comes to Hong Kong and floods the black market with a dangerous drug, only an international team of super-cops can put a stop to threats both mundane and supernatural. Secret anti-magical conspiracies and wizards out of control lurk behind the scenes. Hong Kong Task Force Double Eight are the only ones who can restore the balance.

Hong Kong Task Force Double Eight is a Free RPG Day QuickStart for the Feng Shui 2 roleplaying game with everything you need to start playing a fast-paced, melodramatic, kung-fu cop drama. With four pregenerated characters, you can start playing in no time flat! Show those bad guys in Hong Kong the difference between right and wrong with fists of iron and a kick of sweet, sweet justice!

You can get your copy of Hong Kong Task Force Double Eight this Saturday, June 18, at your participating Free RPG Day retailer. Stick around to play games and kick butt!