Lands of the Nile Arrives in Stores 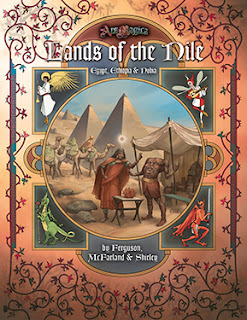 The long-awaited Lands of the Nile sourcebook for Ars Magica Fifth Edition covers all of the lands of the Nile river in Mythic Africa, including Egypt, Nubia, and Ethiopia. Once the realm of the pharaohs and animal-headed gods of antiquity, now Islam and Christianity dominate the region, interwoven with magical traditions and strange creatures known only to a handful of magi in Mythic Europe.
Both players and storyguides of Ars Magica Fifth Editionhave much to look forward to here: in-depth background for playing Egyptian characters; a bestiary of creatures both mythic and mundane; trap-filled tombs of long-dead kings; and additional rules for amulets, spirits, and the treasures of the ancient world. Maps and extensive notes for running stories in Egypt, Ethiopia, and Nubia make up the bulk of this hardcover supplement.