Lands of the Nile Hook: The Seeker’s Guild 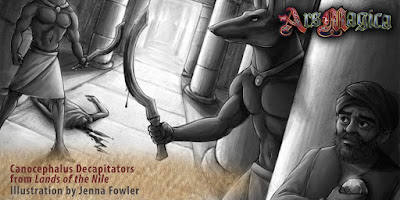 Egypt attracts many tomb-robbers and foolhardy explorers keen to make their fortune by extracting gold and riches from the crypts and catacombs deep within the land’s numerous monuments. So much so that centuries ago Egypt’s rulers, suffering from a lack of wealth in their own right, set about institutionalizing the practice. Now, for a small fee and a cut of the profits, the Seeker’s Guild in Cairo offers guides, books, and even occasional magical assistance — not to mention a veneer of legitimacy — to such adventurous folk.

For players of other fantasy roleplaying games, this may seem like standard business practice, but it’s something of a rarity in Ars Magica Fifth Edition. As a hook to get new players into the game, and to bridge the gap between heroic dungeon delvers and magi of the Order of Hermes, Lands of the Nile’s chapter on tombs and tomb-robbers is ideal. Magi and their companions face many deadly traps and magical opposition, to say nothing of plagues and curses, but having the Seeker’s Guild on hand to light their way makes it all the more palatable. At least until that statue of Anubis comes alive and stalks the protagonists in the dark tunnels deep beneath the pyramids…