Published by: Atlas Staff 02/06/2018
Matt Haga is the designer of Cogs and Commissars, Atlas Games' clever new card game of robot revolution. We asked him about his inspiration, and here's a little of what he said about it:

"There is no better feeling than knowing that a creation from my mind has moved, inspired, entertained, educated, or in any way left its mark on the life of another human being.

I discovered Magic the Gathering at an early age and played it with my friends, and Dungeons and Dragons a bit later on when I finally convinced some very religious individuals that I wasn’t worshipping the devil or summoning Mephistopheles himself. With Magic I was trying to design my own cards as soon as I understood the game’s mechanics. In Dungeons and Dragons I would spend night after night drawing maps, creating dungeons, and fleshing out stories for my friends to immerse themselves in when we all finally managed to get together.
Of course, these campaigns usually ended up being one or two full nights of character creation, one or two nights of getting the campaign rolling, and then someone couldn’t make it for two weekends in a row and everyone would forget everything - sending us back to square one. But it was still loads of fun.This D&D campaign player absence issue is what actually started me on my journey towards the creation of Cogs & Commissars. 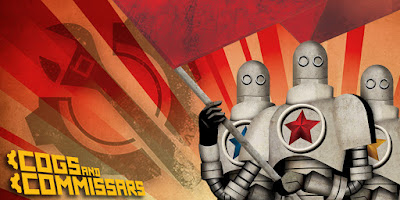 Moving closer to present, my grown up friends and I had not played D&D for years and they expressed to me that they’d love to get together and throw some good ‘ol nostalgia dice. I agreed and got to work, making the most elaborate campaign of my life. Between work schedules, relationships, fickle teenagers, and various dramas, the campaign silently died and board game night was born.
I often thought about the magical formulas which seemed to attract my players over and over again. I wanted to keep my eyes open for fun games to introduce and keep things fresh so I had to know what to look for, but after a while I was having a difficult time finding anything. I wanted something new. It had to be something that we could all play no matter how many of us showed up, it had to be simple enough to grasp for the casual players but deep enough for the rest of us to enjoy, it had to have some degree of personal customization, it had to take up minimal tabletop real estate, it had to have a fun theme, and it couldn’t take all night to complete.
So I started making it myself, and Cogs & Commissars was born."