My Life in the Terminal

Published by: Atlas Staff 07/23/2018
I'm Cam Banks, RPG director at Atlas Games and developer of the new edition of Over the Edge.

I first played OTE in 1993, in New Zealand, when I worked at a community center. I had started up a RPG club that met every week using my room scheduling privileges. One of the club members showed up to run OTE and, as I'd seen it on the shelves of the local game store but never looked much into it, I thought I'd give it a shot.

We never left the Terminal. I think my love for the game started that day.

When one of us shouted out "Guide!" the GM had a Terminal guide pop up from out of what seemed like nowhere to help. He always described the guide from shoes to noose necktie, telling us what color the shirt and pants and tie and shoes were. Such a strange thing to keep going on about. Eventually we figured out that these color schemes never repeated, and while this didn't appear to be connected to anything else that was going on, I never forgot it.

Welcome back to the Island. And please, tip your guides generously. 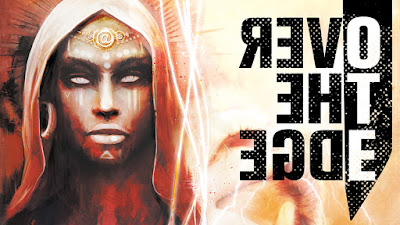