Mythic Locations is Arriving in Stores 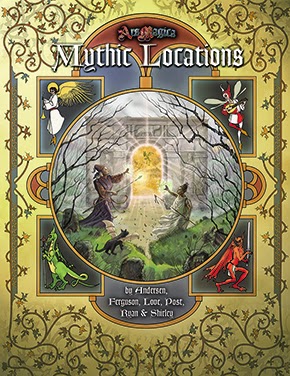 More than twenty years ago the Mythic Places sourcebook and its sequel, More Mythic Places, introduced Ars Magica fans to the idea of presenting story-rich scenario sites in an attractive anthology, ready to be incorporated into ongoing sagas. In the spirit of returning to the game’s early roots, Atlas Games is proud to present Mythic Locations for Ars Magica Fifth Edition.
In this new anthology, ten corners of Mythic Europe are presented in a manner that hooks in the players’ Troupe and serves up a feast of fantasy fare. From the perils of St. Patrick’s Purgatory to the whimsy of the Truffle Matron’s kingdom, each mythic location includes story seeds, character and creature stats, and plenty of useful maps.
If you’re stuck for ideas in a long-term Ars Magica Fifth Edition saga or just need something for a single evening’s entertainment, Mythic Locations is right for you. Return once again to the wonders and woes of Mythic Europe, and make sure the grogs pack light — you never know what dangers lie in wait at your next destination!
Mythic Locations was written by Christian Rosenkjaer Andersen, Timothy Ferguson, Richard Love, John Post, Matt Ryan, and Mark Shirley. Cover illustration by Christian St. Pierre; interior illustration by Brett Barkley, Jenna Fowler, Rachel Kahn, Jeff Menges, Christian St. Pierre, and Gabriel Verdon, with cartography by Matt Ryan.