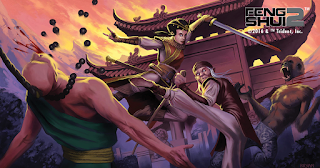 In Feng Shui 2, control of Chi power and Feng Shui sites drives conflict across space and time. Factions seek to dominate access to magic and the Netherworld to pursue their own agendas. For some Factions, their motives are easy to understand. The evil wizards of the Eaters of the Lotus, those wuxia masters who dance across the treetops and shoot lightning from their hands, want infinite power for their nefarious plans. The monks of the Guiding Hand, however, want to impose their moral order for the betterment of society, even if it costs people their freedom.

Some Factions are driven by the need to change history after their own actions proved too damaging. Both the Jammers and the New Simian Army seek to control power of other points in time to correct the devastation they caused in the future by dropping the Chi Bomb, though they're not too careful about the other eras where they go for that power.

Only one Faction has been wiped out completely, but that's where the players come in. Those Maverick Cops, Bodyguards, Everyday Heroes, and Gamblers are the new Dragons, and it's up to them to stop the other Factions before they destroy all of time and space. In the quickstart adventure Hong Kong Task Force 88, now available in PDF format, your team of Dragons fights the Guiding Hand as they distribute drugs on the streets of Hong Kong.

Learn more about all the Factions in Feng Shui 2 from designer Robin D. Laws!