Published by: Atlas Staff 06/19/2016
Atlas Games' President John Nephew was inducted into the Origins Awards Hall of Fame tonite. The following is Michelle Nephew's speech presenting him with the award:

John likes to say that he’s never had a “real” job. He started out writing for Dungeons & Dragons as a teenager, unbeknownst to those who bought him drinks at his first Gen Con. (You know who you are!)

By the time he was in college he started Atlas Games to publish his own writing. But he soon figured out that running a game publishing company successfully was a much more rare talent in this industry, and that’s where he found his calling.

Looking at the games John’s published over the years, another rare talent he’s shown is the ability to recognize true talent in others. Jonathan Tweet, Robin Laws, John Tynes, Greg Stolze, James Wallis, Keith Baker -- these are big names now who John met when they were just starting out.

He fostered their work, and helped bring their creations to life, changing our hobby in the process with some of the most cutting-edge games of their time: Ars Magica, Over the Edge, Feng Shui, Unknown Armies, Once Upon a Time, Gloom. Atlas was publishing edgy and “indie” games before there really were indie games in the industry.

And many of these John picked up as a 2nd edition or later and gave them another chance. Atlas became a kind of “home for wayward games” as a result -- offering groundbreaking game designs that some other publisher just couldn’t break even on.

John has worked for three decades as a kind of literary foster father -- time and again he’s given games that are really innovative a second chance at life. And in that role he’s helped define and expand what hobby gaming is.

Thus the award tonite. Thank you John, and congratulations honey! 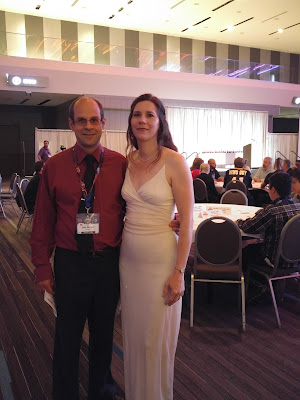 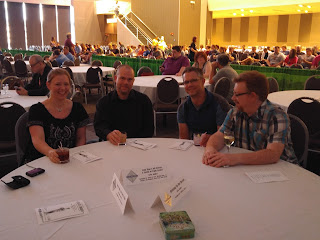