Putting the Fairies in Fairy Tales

Good news! Fairy Tales, the newest expansion for Once Upon A Time, is on game store shelves today!

But wait, hasn’t Once Upon A Time always been about fairy tales? 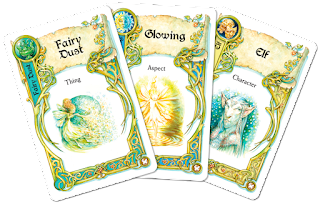 Once Upon A Time hails from, and continues, a tradition of oral storytelling, preserved in literature through the likes of Hans Christian Anderson. It features princes and princesses, magic and giants, and – yes – fairies. These were the stories derived from old folklore, sometimes called “wonder tales” (Wundermärchen, in German), but more often referred to as fairy tales by modern audiences...despite the fact that the fairies themselves might never make an appearance.

So yes, Once Upon A Time has always been about fairy tales. In the sense that it makes stories in the mold of what we think of as fairy tales. And expansions like Enchanting Tales and Animal Tales have expanded upon the motifs common to the Wundermärchen with magic and talking animals and all the things that make wonder tales wondrous. But the fairies themselves – those winsome, tempestuous purveyors of mischief cavorting beneath the moonlight on Midsummer’s Night – weren’t themselves often the focus of those stories. They kept to the shadows, you might say.

Fairy Tales invites them out to play in the sunlight. Pay a visit to a Fairy Circle where Pixies Bargain with Babies for Toys. Or hear the sad soliloquy of a Goblin who Never Grows Old Tangled in the Eldest Spider’s Web. Andrew Rilstone returns to the game he helped create to bring the fairy world into focus, while artist Omar Rayyan once again breathes life into this, the newest of expansions for the classic Once Upon A Time. There’s no more perfect addition to your game collection than Fairy Tales!

And if you want to learn more about the history of fairy tales, this article at BBC.com is a great place to start!

Headlines Once Upon a Time