Round-Robin Rivalry in a Cursed Court Tournament for Retailers

Atlas Games is bringing a new way to experience Cursed Court to the GAMA Trade Show next Cursed Court tournament.
week. Next Monday night, March 12, groups of courtiers vying for influence face off against one another in the first-ever 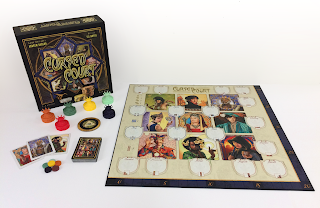 Game store owners and employees can register. After two round-robin games, the six players with the highest point totals battle it out in a final game. The store whose player wins the final match wins all the Cursed Court copies they can sell in a year! Runners-up packages include Cursed Court, The White Box, and other prizes. And every player wins a Cursed Court promo kit, featuring limited-edition game pieces and other exclusive treats.

Cursed Court promo kits are also available to retailers through distribution, so ask your Friendly Local Game Store to host a Cursed Court tournament you can play in!