The Animals Are Taking Over! 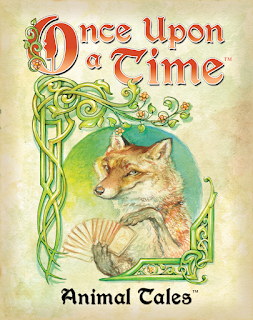 Once Upon a Time Third Edition lets you tell fairy tales of daring knights, dazzling royal courts, and adventure on the high seas. The basic game and its expansions include a wide variety of characters to populate your creations. But there’s a popular group of heroes in folklore who are ready to take center stage…the animals!

Animal Tales is the new expansion for Once Upon a Time, and it’s filled with characters, story elements, and endings that put the furred and feathered in the spotlight. Now players can introduce a wise Owl to counsel their characters, or a tiny Bug who humbles the regal Lion. Descriptive terms like Disguised as an Animal and Man-Eating can turn any human character into a fearsome beast.

Follow the tracks to your Friendly Local Gaming Store or online retailer to add more tails to your tales!