The Death of a Bon Vivant: A Murder of Crows Story 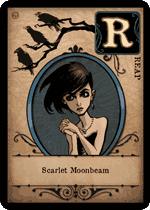 Scarlet Moonbeam was clever and charming. At dinner parties, her anecdotes shimmered with dazzling turns of phrase, her understated wit providing additional amusements for those clever enough to appreciate it.

When Scarlet first met Heidi Harmony she was — to be a little unkind — not impressed. Heidi was not clever like Scarlet. When Heidi told stories, they were coarse. They were loud and blunt. Without subtlety. And yet, everyone laughed.

Night by night and week by week, vulgar Heidi was invited to more and more dinners, and subtle Scarlet found herself eating take-out all alone.

And as Scarlet sullenly shared her stir-fried rice with — well, with no one — she began to have thoughts. Sweet and sour thoughts. Of revenge.

One night, passing through a grove of weeping willows on the way home from a delightful fête, a cool breeze danced through the trees and Heidi heard — or did she imagine it? — a voice whispering out a strange and clever little story of murder.

Heidi wasn’t sure she had heard it, really. And even if she had, it didn’t make any sense. But then again, Heidi was accustomed to not getting the joke.

The week after, as Scarlet Moonbeam shared a meal a the mayor’s manor, one of the guests shared a shocking story about Heidi Harmony, skewered with chopsticks and left for dead in a copse of trees.

It was sad to hear, of course, but it reminded Scarlet of an amusing anecdote that delighted everyone at the table.

Do you have a taste for stories of murder? Murder of Crows is a card game—recently back in print—that challenges players to uncover darkly witty stories of their own, piece by piece.