The Maddening Architecture of R’lyeh 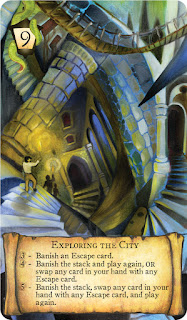 H. P. Lovecraft’s descriptions of the sunken city of R’lyeh in “The Call of Cthulhu” focus on its unimaginable, mind-bending appearance. It’s easy to imagine slimy green, algae-covered edifices that have sat at the bottom of the Pacific Ocean for untold eons, but what about those more obscure terms and concepts?

In the story, Henry Anthony Wilcox describe “great Cyclopean cities of titan blocks and sky-flung monoliths.” This refers to the style of ancient Greek architecture of Mycenae, which stacked stone blocks tightly together, without any mortar. And monoliths are no more than slabs of stone, like those found at Stonehenge.

Later in the story, the crew of the ship Emma actually lands on and explores the risen island which they find off the coast of New Zealand. Their descriptions suggest something more madness-inducing: “He had said that the geometry of the dream-place he saw was abnormal, non-Euclidean, and loathsomely redolent of spheres and dimensions apart from ours.” They say that the walls appeared both convex and concave at the same time. Imagine walls that looked like both versions of that building at the same time. It would certainly give a viewer quite the headache, if not a case of psychosis.

If you’re interested in a deeper analysis of R’lyeh’s mysterious appearance, check out this fascinating read on the Mental Floss website. And while the art on Lost in R’lyeh’s cards from talented illustrator Kelley Hensing is beautiful, it’s best not to stare too long, or risk confusion and madness!