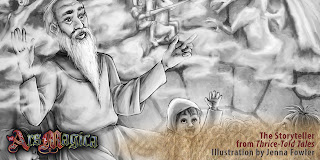 In the mood for a sequel?
Thrice-Told Tales is a collection of linked adventures, featuring the long-term consequences of events that pull the troupe back into the lives of those they previously met. In any Ars Magica saga, returning to older stories is a terrific way to encourage a world that feels real and reminds the players that their choices matter.
Thrice-Told Tales’ model of three-act stories that play out in individual episodes scattered over years is one you can use for your own sagas. After the first few stories in a saga, you might consider looking back at the characters, covenants, companions, and conspirators who made those stories exciting, and write out a list of the choices that the player characters made. Would the baron, freed from a Faerie enchantment, seek to bring war against Faeries later? Or would he send his trusted agents to find protective talismans against Faeries, thus coming into potential conflict with the troupe years later?
A villain who did not die in a previous story might return. A location of great significance may chang in intervening years, now holding greater secrets. An item or treasured tractatus might go missing, just when the covenant is called up on to return it to those from whom they first acquired it. The possibilities for using what came before as the engine of future adventures are endless, and make even the simplest stories richer and more memorable.
If you’re looking for a place to start, check out or return to Tales of Mythic Europe and Hooks, both of which contain short scenarios just asking to be expanded and re-visited!