Thrice-Told Tales is Arriving in Stores 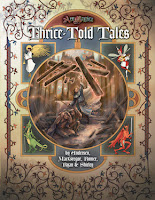 Many adventure collections present stories that entertain the players for one or two sessions but rarely do they get to see the long-term effects of their heroic actions. In Thrice-Told Tales, the actions of the troupe have long-term consequences for their characters and covenants.
For the first time, this Ars Magica Fifth Edition book contains five adventures, each presenting issues and situations that cannot be fully resolved in a single story, but which return to draw the characters back in years later. The choices made in earlier scenarios create a tapestry of later outcomes, a saga stitched in threads of the Divine, the Infernal, the Faerie, and the Magical. Each is a sequence in three acts, drawing on characters and locations that come alive only over the many-year campaigns Ars Magica is famous for.
Thrice-Told Tales features stories by Christian Roesenkjaer Andersen, David MacGregor, Christian Jensen Romer, Matt Ryan, and Mark Shirley. Cover illustration by Christian St. Pierre; interior illustration by Brett Barkley, Jason Cole, Jenna Fowler, Jethro Lentle, and Christian St. Pierre, with cartography by Matt Ryan.