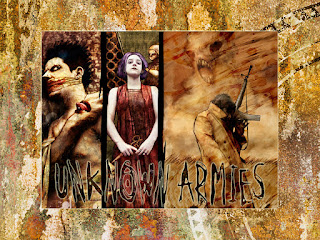 In 1996, John Tynes came up with an idea he called "The New Inquisition." It was a new agey, humanocentric urban fantasy about folks entangled in a postmodern occult underground. Originally the background for a series of short stories he was writing, it then became a proposal for a limited-run comic series that never materialized (but which you can read about here).

In 1997, Tynes still hadn't shaken the concept. Knowing that John Nephew, patriarch of Atlas Games, was looking for a new roleplaying game to publish, Tynes approached Greg Stolze about co-authoring a game based on "The New Inquisition," which became Unknown Armies.

In 1998, Unknown Armies 1st Edition was a provocative, grindhouse version of Call of Cthulhu, with its dingy murder-victim-on-a-card-table cover, madness meters, and magick based on the worst of human urges. But it was more than that. While other urban fantasy and horror roleplaying games were busy trivializing humanity—from both the perspectives of the humans (Call of Cthulhu) and the monsters (Vampire: The Masquerade, Werewolf: The Apocalypse, etc.)—Unknown Armies posited something different: that humans were the only thing that mattered. In the words of co-designer Greg Stolze, "Maybe...you matter too much."

Unknown Armies made a profound impact on the roleplaying landscape, but Tynes and Stolze had only scratched the surface of their modern occult mythology. Over the next couple years, a half dozen sourcebooks like Statosphere and Postmodern Magick appeared. In 2002, Unknown Armies 2nd Edition debuted as a revised and expanded update. It was followed by one sourcebook, Break Today, and the epic campaign adventure To Go, but after that slipped away...not quite into obscurity, but a quiet hiatus.

Now it's 2016, and Unknown Armies is back. The breathtaking Third Edition is a three-volume set that reveals the purpose of its sabbatical. Designer Greg Stolze has synthesized more than a decade of RPG evolution to create a new game that is exactly what you remember and not at all what you expect. The psyche of the player characters is the primary focus without taking away any of the game master's ability to shock or surprise. The setting is reimagined to reflect a 21st century that's already taking shape.

Unknown Armies 3rd Edition will be available soon in a pristine Digital Edition that includes PDF, ePub, and MOBI versions of all three rulebooks. Preorder them now at BackerKit and have them the moment they're released! Or you can preorder the deluxe hardcover volumes, expected to be available in the spring of 2017.